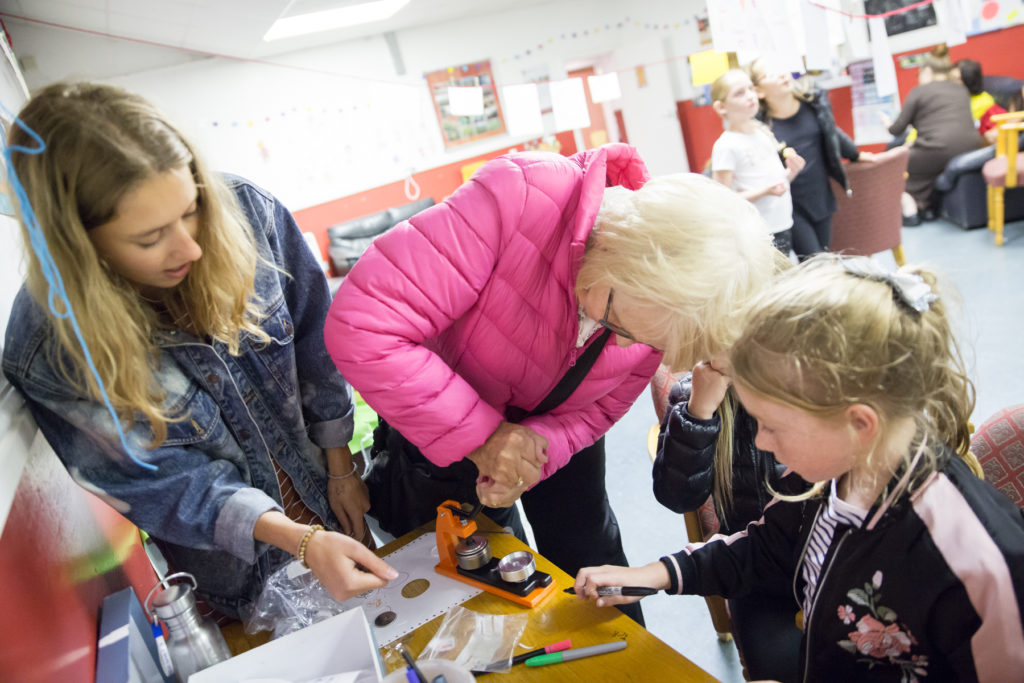 Over the summer holidays young people from Ashton Vale youth club worked with staff from Wyldwood Arts and older people from the club’s weekly Silver Social group. Together they experimented with visual arts, media and event organising. In the first session we played some ‘getting to know you’ games, finding similarities and differences – it turns out not everyone is a City Fan!!

A plan was formulated to host an event which would include an adults vs kids football tournament! Over the following weeks the group continued to work on plans for the event by making recycled gift boxes, creating a football kit badge, baking delicious cakes and designing a poster for display. On September 19th 2018, the club opened it’s doors for the ‘Silbury Celebration’. The place was packed with parents, siblings, neighbours and club members. The team from Wyldwood brought lots of tasty treats and strung up some photographs from the summers’ sessions for the parents to see. Club leader Julie cooked up a batch of hot dogs and sports apprentice Ted managed to organise the group for the football tournament. By the end of the evening despite an fantastic effort by the grown ups, the ‘Golden Tournament Cup’ was won by the young people! We also completely sold out of cakes and crafts but managed to raise a whopping £130 for the club. The money will be going towards a free residential for the young people next spring.

We are delighted with the outcome of this partnership and hope the older and younger club members will now develop more projects together in the future. A massive thanks to Julie and the staff at the club as well as the team Wyldwood Arts. A special thanks to Marilyn who ran our upcycling session and Ray who donated his artwork to raise funds on the night.

All photos were by Camilla Adams, you can see some more HERE

Young Bristol
Previous Post
Our response to the Government’s Loneliness Strategy
Next Post
Community Club of the Year Winner!
No results found.